Squirrels in the Public Garden

Over the years of walking in our parks, I’ve come to love the graceful, leaping squirrels who live in the trees. In the Public Garden, where they live surrounded by people, they’re tame enough to eat out of humans’ hands. I give them pecans and walnuts and love to watch them eat, holding the nuts in their delicate hands as they sit up on the ground or on a tree branch or sometimes as they hang upside down on a tree trunk! The Public Garden squirrels are among the world’s most privileged: every time it snows, many people think of them and bring them nuts. 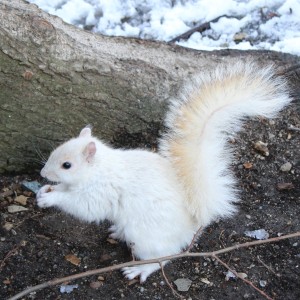 Saturday afternoon, for the first time, I saw a white squirrel in the Public Garden. I don’t know how long it’s been there; I walk through there fairly frequently and had never seen it before. It was shyer and more skittish than the gray squirrels, wanting to join in on the feeding, but being a bit bullied by the others, maybe because it looks different.

At one point it ran up a tall tree with its nut, and swung upside down from its back feet, as if it was on a trapeze. 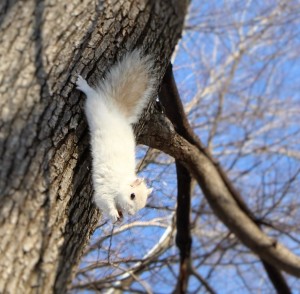 We used to have a white squirrel at Jamaica Pond. For several years it lived on our side of the pond, and I saw it frequently near a certain tree not far off the path. It became quite tame and would come to within a foot of me to pick up a nut, but it never ate out of my hand like the Public Garden ones. It eventually died of natural causes, we were told. While it was with us, it lent a touch of enchantment to the pond, and I always looked for it when I walked by its home area.

One response to “Squirrels in the Public Garden”